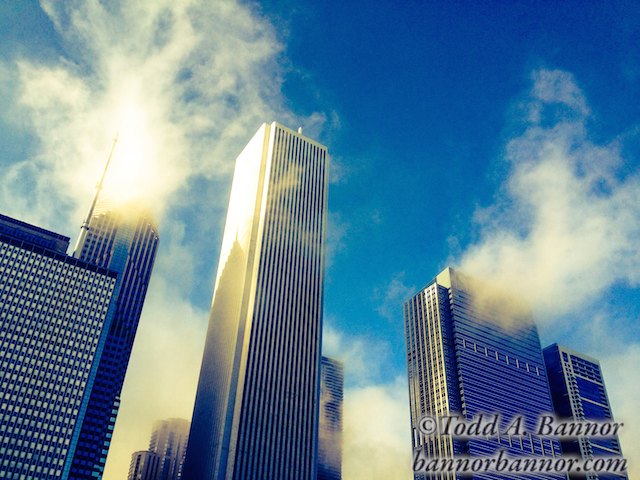 Chicago is a long day’s drive from mountains of significant prominence. But, over 100 years ago, the people of Chicago started building our own mountains. The skyscraper was invented here. Once in awhile, these towers affect the weather in manner similar to mountains. When the wind blows out of the north/northeast, traveling down the full length of Lake Michigan, it picks up moisture from the big lake. Most places it makes landfall, there is nothing to impede its flow. But in Chicago, it slams into the artificial mountain wall we’ve built and is forced up. The air cools and the moisture it’s carrying condenses into clouds. This is called “orographic lift” and is familiar to anyone who’s spent time in the mountains.

I’ve observed this phenomenon many times, most recently yesterday. After a long day spent with a colleague, I dropped him off at his downtown hotel. As afternoon rush hour was in full swing and traffic was typically terrible, I decided to park and take a walk through Grant and Millennium Parks. The north wind blew briskly in from Lake Michigan and spectacular plumes of clouds formed on the towers as you can see in the photo.

I admit it, I shot it with my phone and ran a filter on it. I’ve been doing a lot of iPhone photography lately and it’s a lot of fun.