Color or Black & White? Why Not Both? 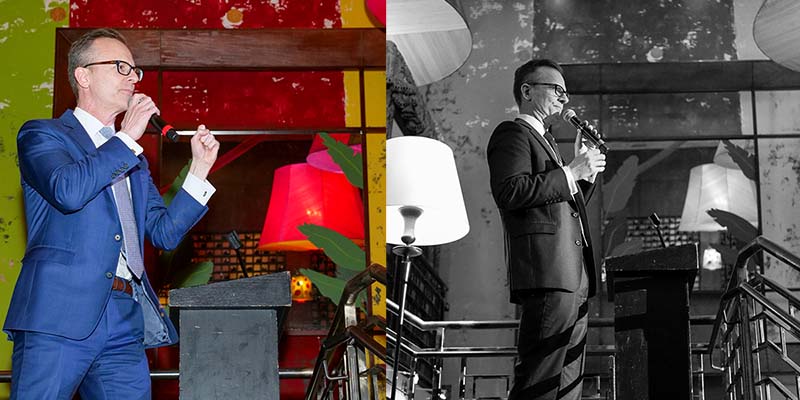 One of the features I like about digital photography is being able to shoot both color and black & white photographs of the same event. As I use the relatively small Panasonic Lumix Micro Fourth Thirds cameras, I can easily carry two camera bodies, one equipped with a flash and zoom lens set to shoot color and the other equipped with a fast prime lens and set to shoot black & white with available light. Admittedly, shooting with available light means using higher ISOs, which can result in grainier photos, but this adds to the look of black & white images.

There are a few other reasons I prefer smaller cameras for my event work. It’s much easier on my back and the older I get, the more I appreciate this. Also, using smaller cameras allows me to be less obtrusive during an event. I frequently receive comments that people forget I’m taking photographs. And, when I set a Lumix camera to black & white, I have the option of using a setting called “L Monochrome.” Panasonic collaborates with Leica, and some of their higher end lenses are branded as Leica lenses. Leica doesn’t manufacture these lenses but does have a hand in their design. The L Monochrome setting emulates the black & white photographs produced by Leica film cameras and a particular type of black & white film, although Panasonic doesn’t identify which film. It’s probably safe to say the film is Kodak Tri-X, which was the go-to black & white film for many photojournalists and street photographers back in film days.

The fun thing is, if I set the camera to L Monochrome, what I see through the electronic viewfinder is black and white. If the camera is set to shoot both a raw and jpeg file, the result is a black & white jpeg that can be transferred to my phone via wifi and shared immediately. However, the raw file retains the original color information, so if I want to produce a color photo from the file later, it’s no problem. I’ve rarely done this as the black & white jpegs look really good. I like it so much I sometimes set up the camera this way when I’m out shooting personal work. It good to have choices.