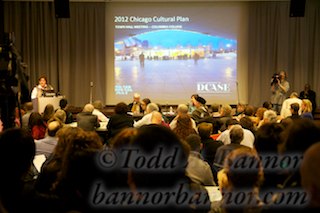 Last night I attended the City of Chicago’s Cultural Plan Initiative Town Hall at Columbia College. I was running late and traffic was horrendous through the Congress Parkway construction (had the town hall been during the day, I would have taken the train) so I arrived ten minutes after the meeting start. I was amazed at the turnout. The crowd spilled into the hall outside the fairly large meeting room. That so many people attended really demonstrates the arts are very important in the life and vibrancy of Chicago.

The goal of the initiative is to support the arts and artists throughout the city and to enhance Chicago’s economic growth and its reputation as a global cultural destination. In the breakout session i attended, several ideas were put forth including increasing the amount of public art in the neighborhoods, utilizing existing vacant commercial property as art and cultural centers and having neighborhood chambers of commerce support local artists monetarily through exhibits and performances.