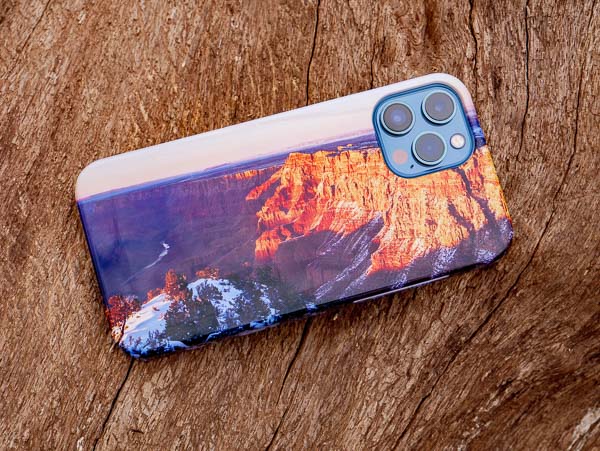 I’m not one to upgrade my mobile phone very often. I’d been nursing my aging iPhone 6, hoping it would last another year or so. Unfortunately, it got to the point where it would slow down for no reason and sometime freeze. Restarting it didn’t help. Interestingly, the battery showed as having 85% of it’s charging efficiency, so that wasn’t the problem. I decided to bite the bullet and replace it. Keeping phones as long as I do and wanting one I could use as an always with me camera, I leaned toward the iPhone 12 Pro. As it happened, the regular Pro model was back-ordered, so I splurged for the iPhone 12 Pro Max. The Max’s main camera has a larger imaging sensor  than the plain Pro. This helps produce photos with less digital noise in lower light conditions.  It also has sensor-based image stabilization, which is a similar technology to that in some cameras, including the ones I use. This means being able to take sharp, steady shots in dim lighting conditions.

I decided to compare the photos the 12 Pro Max produces to my previous carry everywhere camera, an old Canon Powershot G16 advanced point and shoot. The G16 takes high quality photos. They’re good enough for fairly large prints and acceptable to my stock photo agency. What I noticed is, Apple has come a long way in photo quality. The phone takes photos that look better out right out of it than the little Canon does. The color is more saturated and I find it more pleasing. It also deals with backlit and high contrast scenes much better. This is due to the Deep Fusion processing t hat Apple does. When you take a photo with the 12 Pro series, Deep Fusion combines frames taken before you click the shutter as well as from a frame after you click. The G16 does have a high dynamic range mode, which takes three quick frames of different exposures and combines them, but it is dated technology and doesn’t seem to do as good a job. Here are a couple of photos, one taken with the Canon G16 and one taken with the iPhone wide camera. The photos are of the Nathan G. Moore House, designed by Frank Lloyd Wright and located in Oak Park’s Historic District.

One issue with the phone though, is I noticed banding in blue skies when taking photos in the regular non-raw mode. I’ll get to raw mode in a bit. But when set to save images in either the new high efficiency image format (HEIF) or jpeg, deep blue skies have some banding apparent. This makes editing these images with filters found in apps like Instagram and Photoshop Express problematic, as this can enhance the banding.  A work around is to use Apple’s ProRaw mode, which saves images as raw DNG format files, but with Apple’s Deep Fusion processing included. Unfortunately, raw files are big, they take up about 25 megabytes of space. You eat up your memory quickly if you use raw for all of your photography. The banding issue is in all likelihood fixable, so hopefully a future iOS update will take care of it. In the meantime, you can shoot raw for blue sky images, process the image in your favorite processing app, save it as a separate jpeg and then delete the raw file if you wish. If you want to keep the raw file, I recommend copying it to your computer but deleting it from your phone. Below is an example of the banding, which I’ve enhanced in Adobe Lightroom. You can see it just above the roof.

I should also mention the iPhone 12 Pro Max produces great quality 1080P or 4K videos. The sensor-based stabilization of the main camera results in jiggle free videos. It also has the option of slow motion 1080P videos at either 120 or 240 frames per second. There aren’t many consumer cameras that can record high-definition videos at 240 fps. You can check out an example of slow motion video here.

I also tried Portrait Mode with a willing subject and the results are pretty good. The computer-generated background blur is convincing, although fine features like cat whiskers can confuse it as you can see in the first photo below. You also get a choice of lighting effects which are Natural Light, Studio Light, Contour Light, Stage Light, Stage Light Mono and High-Key Mono, which is what I used for the first cat photo. They’re fun to play with. Also, if the background blur isn’t to your liking, you can turn it off after you’ve taken the photo and revert to the expansive depth of field typical of phones and other cameras with really small imaging sensors, which is what I did with the second photo below.

As you can see in the featured image at the top of this post, I outfitted my 12 Pro Max with (shameless plug alert) a custom case from my Fine Art America/Pixels store. I find the case makes this rather large phone easier to handle. As mentioned by some reviewers, the squared-off sides of iPhone 12 models makes them a little uncomfortable to hold for some people and I’m one of those people. The case smooths out those squared edges and looks awesome too.

My opinion of the 12 Pro Max is it is a great carry around camera, with the one deficiency regarding deep blue skies. I’ll use the ProRaw feature for this, but hopefully Apple addresses the issue with a software update. But, I find the images are good enough for personal use. The sky banding isn’t really apparent until you’ve edited the photos, so if you are simply recording family moments and vacations, it’s fine.  I have also uploaded a few images to Alamy using their Stockimo app, so we’ll see if any of them sell for stock image use. Phone cameras have come a long way. I don’t think I’d use one to shoot an entire wedding (this has already been done, actually), but I can see where it could come in handy at an event if you’re shooting with a telephoto lens, don’t carry two camera bodies and suddenly need to get a wide shot and there is no time to change lenses.

I’m having a lot of fun with the 12 Pro Max and it’s nice to have a camera slim enough to slip in a pocket when I don’t want to bring a larger camera or look like a photo nerd. Oh, and it works really well as a phone too.