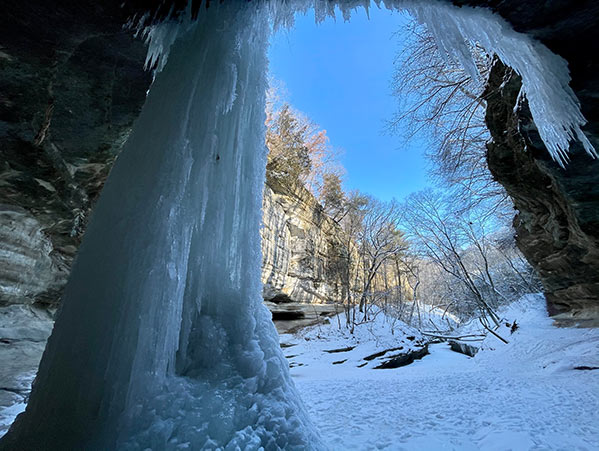 In a previous blog post regarding the iPhone 12 Pro Max cameras, I mentioned that I found banding in blue skies to be a problem when shooting regular compressed HEIC or jpeg files, rather than using Apples ProRaw format. I’ve discovered what the problem is. A new feature of the iOS Camera app is Scene Detection. This feature is similar to the Intelligent Auto modes found in many cameras. These modes attempt to apply edits to the photo you’re taking based on the type of scene the camera is pointed at. I’ve occasionally used these modes on point & shoot cameras, but almost never with any of the interchangeable lens cameras I’ve owned.

The problem with Apple’s version of this mode is its algorithm overdoes it when it detects a blue sky. This may result in banding or a stepped appearance from darker to lighter parts of the sky. To be fair, if you manually over-edit a jpeg from a conventional camera, you can get this  artifact as well. The problem is compressed files generated by phones and cameras are 8-bit files, which have 256 levels of gray from white to black. Go too far with editing and these levels can merge together to generate the stepped appearance. Using a raw file gets around this, as they’re higher bit, usually 12 or 14 bits and so have many more steps between black and white. The problem with raw files is they’re big, 25 megabytes in the case of Apple’s ProRaw format. This eats up built-in memory space quickly, so most people are only going to use it for special images.

I know from experience that jpegs from previous iPhones can be edited a fair bit before banding becomes a problem. So, I finally dug into the settings on the 12 Pro Max and found the new Scene Detection mode in the camera settings. The screenshot below shows where to find Scene Detection.

I also turn off “View Full HDR” in the Photos app (Settings>Photos>View Full HDR), as this affects how the image is displayed and can lead to artifacts.

The featured image at the top of this post was taken with Scene Detection off and Raw set to off. All I did as far as editing was to use the Auto Enhance feature in the Photos app. Below is another copy of the image (left) along with a copy that was edited using the HDR3 look in Photoshop Express (right). As you can see, there is no banding in the sky even with the heavier edit. Clicking on either image will open up a larger display on my Smugmug site. As you can see, the image holds up to a fair amount of editing with minimal banding in the sky. Note these images were taken with the ultra wide camera, which has a smaller sensor than the main camera and is therefore more prone to noise, especially in the shadows.

The image below was taken with the main wide camera. Click to view on Smugmug. You can see the image quality is better than the ultra wide.

If you want the most flexibility in editing, I recommend using the Raw setting. You can turn it on or off easily using the bottom at the top right of the phone’s screen in the Camera app. But for everyday images, you can save space by shooting with Raw turned off and you’ll still have some flexibility to edit the images.

Regarding my previous post on the iPhone 12 Pro Max, a question came up on why I use the iPhone 12 Pro Max over competing models, which have longer zoom lenses. The primary reason is I use the Stockimo app to upload my phone images to Alamy for stock use. Stockimo is an iPhone only app. I also know from experience that very long zoom lenses on small sensor devices don’t have a level of image quality good enough print and definitely not good enough for Alamy. They’re fine if you’re keeping a memory and only viewing the resulting images on your device. I also have very good to excellent zoom lenses for my cameras, so if I’m out doing serious photography, that’s what I use.

If I’m just out and about, I don’t find the iPhone limiting. In fact, having a smaller selection of focal lengths forces you to think about composition. I’m no Henri Cartier-Bresson, but he spent most of his career using mainly a 50mm normal lens or occasionally a wide angle lens. I’m happy with the options the 12 Pro Max offers.