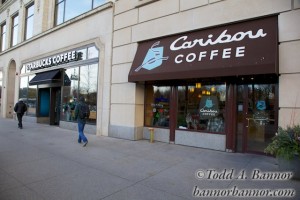 Selling stock photography requires a bit more luck today than it did back in the mid 1990s when I first started. The competition is much more fierce. But you can sway the odds by thinking conceptually. You never know when a conceptual image may find a user and sometimes current events generate news stories that require a conceptual as well as a specific image. And, sometimes images which combine the two pop up right in front of you.

When I was walking down Michigan Avenue in December of 2011, the concept, “competition,” appeared right in front of me, so I took several shots. The images also had two specific subjects. I had no idea at the time how the images would be used, but I was pretty certain one or another of them eventually would find a buyer. I also, of course, had no idea Caribou Coffee would decide to close many of its Chicago stores this month. But as I thought, my hunch paid off. Here is a Huffington Post story on the Caribou closings.